The transport of 79 metre long rotor blades cross-country posed very special challenges. To manage this, Steil Kranarbeiten relied on the rotor blade adapter from TII SCHEUERLE. The new, fourth generation provides further optimised technical qualities that had to prove themselves in this transport - and mastered the challenges with flying colours.

Narrow streets in towns and villages, densely planted avenues, low-hanging high voltage lines and a number of roads with severe bends - the six-kilometre route from the loading area near Cramme, east of Salzgitter, to the Flöthe wind farm is peppered with obstacles. Steil had to use this route to transport several rotor blades for a well-known manufacturer of wind turbines which included versions with lengths reaching almost 79 metres. In order to complete the assignment, Steil Kranarbeiten relied on equipment from TII SCHEUERLE, a subsidiary of the TII Group. An InterCombi self-propelled vehicle combination consisting of two sets of six axle lines as well as the especially powerful fourth generation (G4) rotor blade adapter was used.

Rotor blade adapter G4 provides high load moment throughout the entire setup angle
"The rotor blade adapter G4 made a significant contribution to accomplishing the task," reports engineer Sebastian Sehl, company secretary at Steil Kranarbeiten and responsible for project management. The high load moment and the high setup angle of the system were decisive. The rotor blade adapter G4 made it possible to swing the load over the houses along the town and village through-roads and other obstacles such as road dividers and to drive through the limited clearance profiles of the avenues. "We had to erect the rotor blade, which weighs more than 20 tonnes, by up to 45 degrees in order to shorten the transport," explains the project manager. According to Sehl, this angle required a load moment of 650 metre tonnes. “A high set-up angle is required in avenues and wooded areas. As a result, fewer branch cuts and tree fellings are necessary,” reports the engineer. Furthermore, the smallest possible vehicle width is an advantage so that access roads do not have to be widened more than is strictly necessary. This would also result in additional tree felling and time-consuming excavation work. The SCHEUERLE InterCombi axle lines can be driven using two widths - namely 3.0 and 3.49 metres. “This reduces the amount of space and work involved when transporting smaller rotor blades. The cost-effectiveness of the transport thus increases,” explains Sehl.

Rotor blade adapter G4 equips transport fleets to meet the challenges of the future
The fourth generation of the rotor blade adapter offers generous reserves - with customers well equipped to handle future tasks. In contrast to some competitors´ products, the maximum load moment of 900 metre tonnes can be used over the complete set-up angle of 60 degrees so that even heavier or longer rotor blades, such as those used for the most powerful wind turbines, can be transported efficiently. In addition, the rotor blade adapter can also be easily adapted to suit different root diameters and also features a new height adjustment feature to allow it to be driven under bridges when loaded. “The rotor blade adapter G4 thus offers a high degree of cost-effectiveness and security of investment. With it, Steil Kranarbeiten is equipped for current and future rotor blade transports,” argues Sehl. Rotor blades could soon measure more than 80 and up to 100 metres in length.

Innovations that significantly optimise profitability
The optional quick-change system for the rotor blade adapter also contributes to the cost-effectiveness. The rotor blades can be pre-assembled and then lifted onto the rotor blade adapter using two cranes. While one team is transporting the first blade to the wind farm, a second can already start mounting the next blade onto the quickrelease system. In addition, TII SCHEUERLE has developed a drawbar coupling element in order to be able to quickly pull the self-propelled combination back with a truck tractor for an empty run. Both accelerate the process of the transport assignment and save time - and this is a valuable commodity in the special transport business.

Major technical advances from the second to the fourth generation
Handling the rotor blade adapter is nothing new for Steil Kranarbeiten. The company already has a second-generation model in its fleet of vehicles. In a direct comparison, Sehl emphasises that the latest version offers advantages in many respects. "In addition to the increased load moment and the high set-up angle, these include the height and width adjustment and also the optimised remote diagnosis and stability monitoring," says Sehl. The rotor blade adapter G4 can be monitored via remote diagnostics. In the process, the fleet operator has access to all status reports. Furthermore, Sehl praises the effectiveness of the vehicle's working lights which are activated by means of the remote control. When driving at night, this naturally increases the level of operational safety.

The name SCHEUERLE stands for cooperation based on partnership
The services provided by TII SCHEUERLE go beyond merely for the vehicle itself whereby customers receive a stability calculation for each rotor blade. This includes the limits of what is technically feasible and incorporating the influence of wind and slope of the terrain. TII SCHEUERLE transmits these values to the remote control of the rotor blade adapter so that the vehicle operator is warned when the transport is approaching the limits of stability. Finally, it is people that make the difference. "With SCHEUERLE, we have also been very impressed by the excellent cooperation we have experienced for five years now," sums up the company secretary. As a result, Steil Kranarbeiten has the best product on the market. 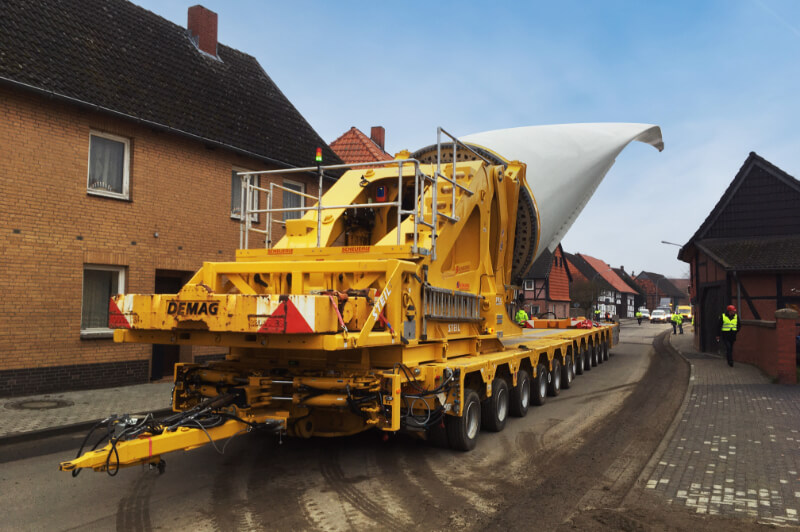 Successful transport: The up to 79 metre long rotor blades reached the Flöthe wind farm transported on 6 + 6 InterCombi axle lines. With the help of the rotor blade adapter G4, bottlenecks could also be easily accommodated and obstacles simply swung over. 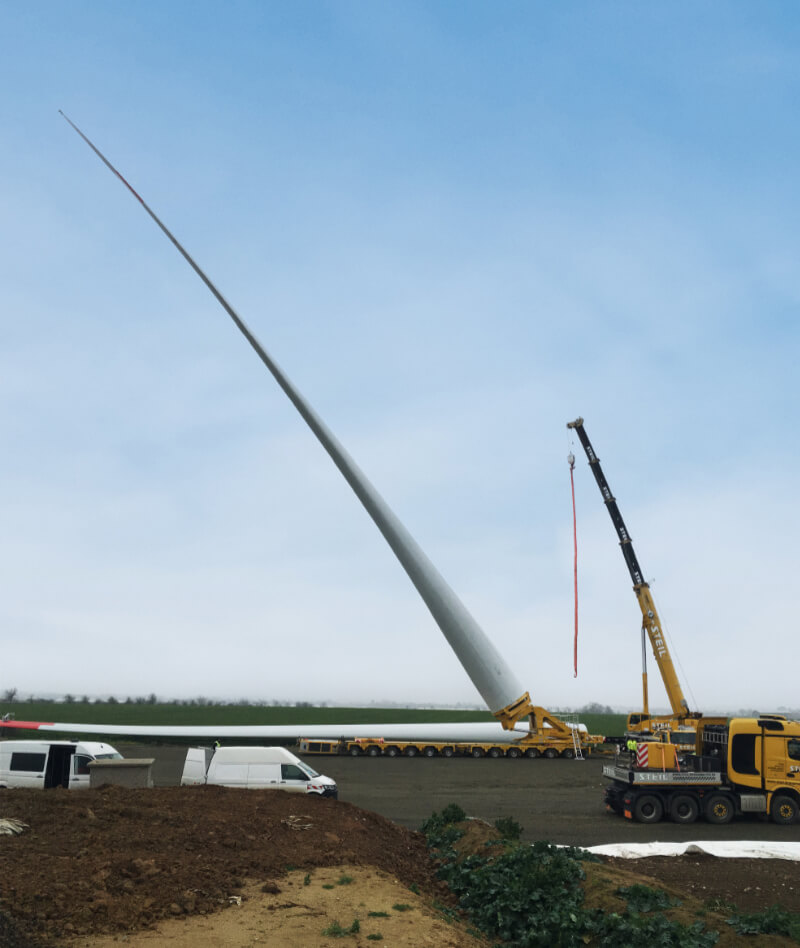 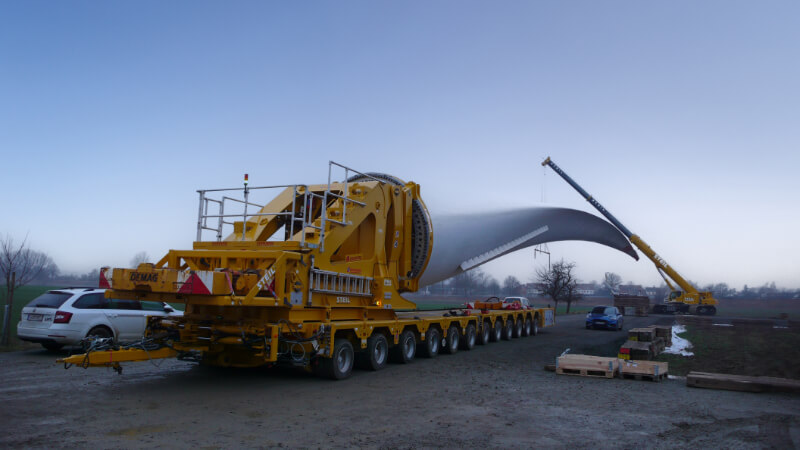 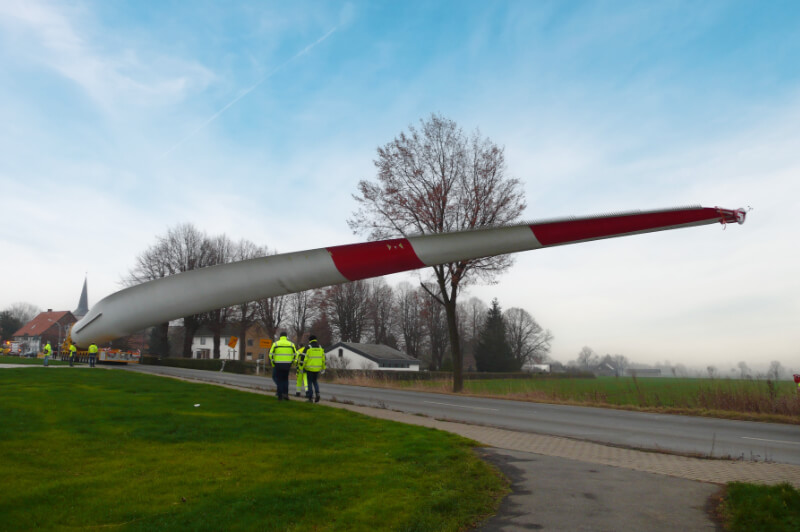 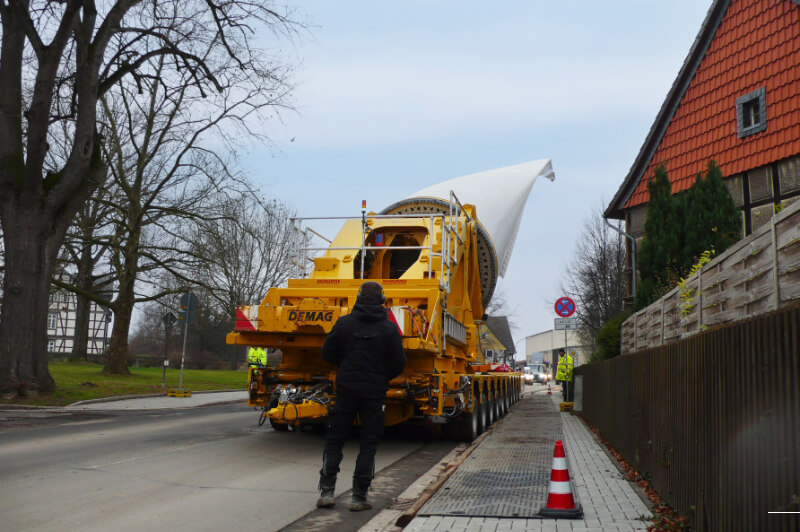 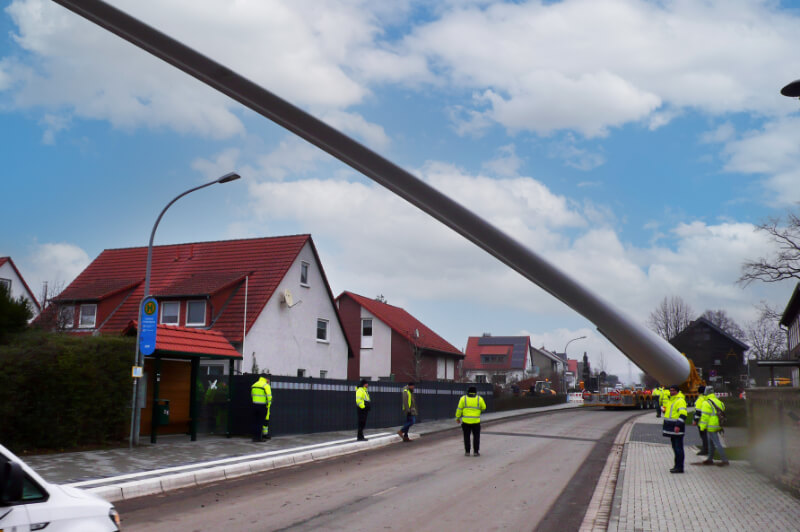