It is a fact that digitisation is moving forward very quickly and the corona pandemic has accelerated this process even more. In order to remain competitive and able to act, companies cannot avoid having a sustainable digital strategy. Against this background, the renowned business magazine Focus Money has selected the Digital Champions 2021 as part of the so-called Deutschland Test (Germany Test). The study was carried out in collaboration with the Institute for Management and Economic Research (IMWF) and with scientific support provided by the Hamburg World Economic Institute (HWWI).

TII Group ranks as one of the top 10 logistics companies
According to the study, the Transporter Industry International Group (TII Group) of the Heilbronn-based Rettenmaier family - with its special vehicle manufacturing subsidiaries SCHEUERLE, KAMAG, NICOLAS and TIIGER - has earned a leading position in the top 10 of the companies analysed and ahead of numerous well-known logistics groups in the "Logistics Company" category. With this, the TII Group subsidiaries have underlined their innovative strength and competitiveness as well as their resilience in meeting challenges such as those triggered by a pandemic.

13,000 companies, 438 million sources, 11.2 million reviews
In order to determine the digital champions of 2021, the study supervisors said they had carried out a comprehensive analysis of statements from around 13,000 companies in the categories of digitisation, technology and innovation. The selection process is based on a two-step test model. On the one hand, companies had to answer an extensive questionnaire. On the other, the researchers used so-called social listening on the internet to collect information about the companies on the topics of digitisation, technology and innovation.

According to Focus Money, a total of 438 million online sources in the period from January to December 2020 formed the database for the social listening. This resulted in 11.2 million relevant mentions for the 13,000 companies. These were then subsequently evaluated according to, among other things, how often a brand was mentioned in the thematic context while also taking into consideration all positive, negative and neutral ratings. Subsequently, the scientists summarised the performance information of a company in the two sub-areas of the study and determined the total number of points. Focus Money has just published a detailed report on 17th February 2021 in Issue 9 of the magazine. 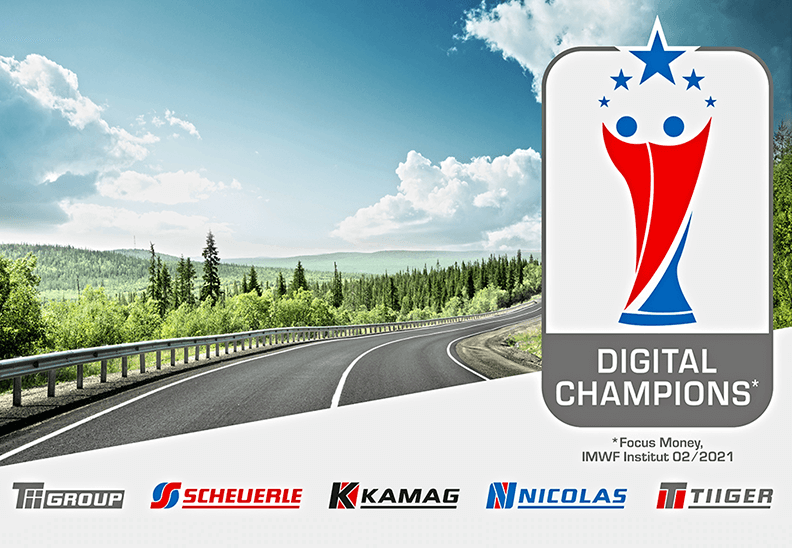 Double victory for the subsidiaries of the TII Group. As in the previous year, KAMAG, SCHEUERLE, NICOLAS and TIIGER are digital champions again.